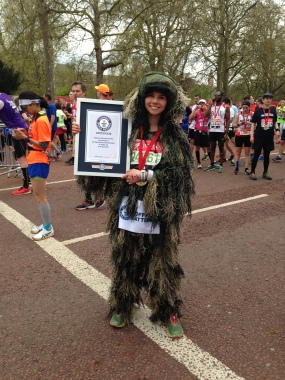 Just after finishing the London Marathon 2016

In May of 2015, I entered the ballot to run the London Marathon, somewhat by accident but that is a story for another day. Fast-forward to October when I arrive home one evening from work to open an envelope containing a magazine proclaiming acceptance to the London marathon 2016. I couldn’t believe it! People enter for so many years on the trot without getting in and I got in on my first attempt. Dejected at the thought of having to start running on the road, something I usually try to avoid I started browsing the acceptance magazine, which was full of information and interesting articles. I saw the section that showed some of the Guinness World Records (GWR) which were set in 2015. There was the Fastest marathon dressed as a Superhero (male) with the elite time of 2:30:12, Fastest marathon dribbling 2 basketballs (male) 04:10:44, Fastest marathon 3 legged (female) 04:45:21; the list goes on… It all looked like so much fun!

If I had to run on the road, maybe I could do something silly like run in a costume I thought. I couldn’t think of any cleaver or witty costume so decided to check if any record had been set for the only costume we had; a Ghille Suit (sniper suit). I had run in it once before for an off-road Halloween Hash Run with local Sheffield running shop Front Runner, it wasn’t so bad.  I couldn’t find a record, so decided why not? I doubted they’d accept my application anyhow. I applied online on the 13th of November and had somewhat forgot about it until January 14th when I had an email saying that my application had been accepted – uh oh. All of a sudden I was filled with dread, in the email they specified that I would have to run the marathon in under 4 hours. This was faster than what I had proposed to them, but their reasoning was that it needed to be ‘challenging enough’, so 4 hours had to be the goal then. GWR and London marathon have a special set up where you don’t need to have witnesses for your attempt because they have people around the course who are looking out for you, so when you finish and if you make your time you are awarded the record instantly.  Attempts in other venues need to have witnesses and statements from race organisers but I luckily was able to avoid this.

Waving at the camera mile 6 with the Cutty Sark in the background.

It took me about a month after receiving the email to decide if I was actually going to go through with it, I mean it’s pretty crazy. My training continued, yet not in the suit. I couldn’t bring myself to run in it by myself let alone embarrass those I was running with either. Instead I resorted to wearing lots of layers, making sure I was used to running while being too warm. Sheffield Half Marathon, two weeks before London was the first proper sustained run in the suit and what fun it was. The crowd and support were amazing! The best comments of the day were ‘you can run but you can’t hide’, ‘can’t see you mate’, ‘Go bog monster!’ among others and lots of screaming children.

The week leading up to London I had an awful cold which was starting to go away by the Sunday but was still very much there on race day. The pre-race Expo was full of excitement the Friday before the race. I meet Dame Kelly Holmes in the queue to pick up numbers, you see being a Guinness World Record attempt I got to start at the fabulous green start. A lot less people, and celebs too! 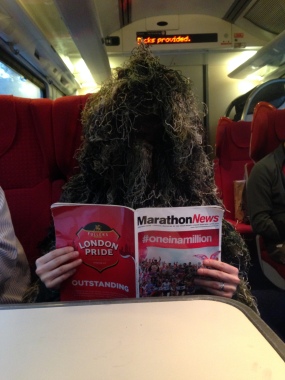 On the train to from Sheffield to London.

It was a crisp and dry morning, as I made my way to the start in full costume. Lots of looks, but no comments. At the start I met the Guinness World record officials I had been corresponding with and checked in, getting my photo taken, receiving the GWR attempt badge I had to wear and meeting all the other people in costumes.

My aim was to finish in 03:56:00 which is a 9 minute per mile pace. This would leave me with 4 minutes to spare. A friend of mine had told me that at London the first 13 miles fly by so I was banking on this but I found each mile really hard, my cold came back in full force while running and my nose wouldn’t stop dripping. At least I had hidden tissues up my sleeve! The excitement and rush that came from the noisy crowds when running over Tower Bridge mile 12-13 were fantastic. My mom had flown all the way from Canada to watch me run and we missed seeing each other at mile 13 which was really disappointing. Though as timings were quite tight I couldn’t focus on looking for her I just had to put my head down and run. I ended up dropping two of my gels, from numb hands and a poor storage system. This left me without food from mile 18 onward. Thankfully at mile 21.5 there was a food station, with probably the most horrid gel I’ve ever tasted but it did the trick though left a horrible jam taste in my mouth. At mile 23 I was elated that there was water. I was too tired to move over really close to get some and there was someone right beside me, so I just stuck out my right hand hoping for the best, then all of a sudden I felt this hand grab my wrist then a bottle of water was slapped into my hand. It was the lady that was right beside me! I nearly cried at the gesture.

The final few metres of the London Marathon.

Shortly after this I became annoyed at the immense amount of noise from the crowd and all the people walking/staggering on the thin blue line; the blue line marks the shortest route and the exact measured distance of the marathon and you are advised to follow as closely as you can to the line unless you are walking – walkers should stay to the edge of the course to keep out of the way of those running. I had a time to beat and it was getting way too close now. At this point it was looking like I would finish in 03:59:00, which only left 1 minute buffer time to get under the 4 hour time required. All of a sudden I heard my name, I looked over and it was my mom! I waved quickly and kept going, but I was elated that we were able to have seen each other. In the last few miles and down the Mall to the finish was a bit of a blur as I tried keep my pace up. I crossed the finish line in 3:59:13. The Guinness World Record official Adam walked up to me just after the line and said ‘Congratulations, you’ve just set a world record’. I had a photo with him and a certificate then was on my way to meet up with my mom and all the other runners from my club. There were 30 other records set at the London Marathon 2016, check them all out here or get yourself a copy of the Guinness World Record Book 2017 edition and look on page 6 & 7 which showcases all the London Marathon records set that day.

Tweet from Guinness World Records shortly after I finished.

I’m really grateful to have such generous friends and family who helped me raise over £1000 for New Life Medical and Educational Trust which is a charity that runs schools for pre-school aged children in the slums of Mumbai.

*Special thanks to Mick Wall from the Steel City Striders for the top image which was taken at the Sheffield Half Marathon 2016.

7 thoughts on “My Guinness World Record”