Last week I had the opportunity to attend OutDoor: an international trade fair for businesses involved with the outdoors. Boasting 950 exhibitors from 40 different countries, there was plenty to see and do for a gear-geek like me! My special interest usually goes out to footwear, as you might have previously read about in my running shoe research post. As a sneak preview into the future of trail running shoes, here are the top three developments I have seen:

One notable trend was that the boundary between approach, scrambling and running footwear has begun to fade. Throw a little comfort and improving looks in the mix, and you have a shoe which you can wear in the city, hills and on the trails. I end up travelling around Europe a lot (often for work) and this type of shoe would be great for such trips – though I am not so sure if I would trust it for my ultramarathons! 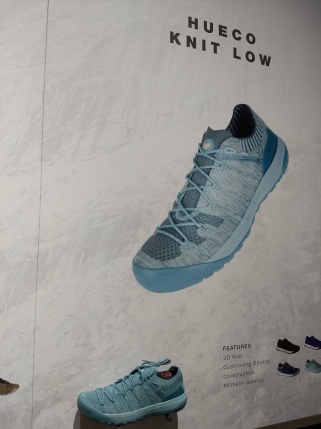 Mammut is coming out with a city-to-mountain approach shoe with a knitted upper.

Brands moving into the market

Brands we traditionally know from their mountain apparel are moving into the footwear market, such as North Face and Arc’teryx. Though this is not new in 2019, they are expanding their range. Arc’teryx is focusing on weight with their new ultra-light shoe.

Arc’teryx which is more known for their mountain clothing range is moving into the footwear market.

Other traditional walking boot brands such as Keen are bringing out a ‘fast and light’ range of shoes which looks suspiciously like running shoes. Although, if you ask me, I still found them quite heavy!

Then lastly On, the new brand on the block which has recently established itself in the road running shoe market, now also has ventured into trail running. They took their popular Cloud Surfer shoes and added a little tread on the bottom. I had the opportunity to take their trail shoes for a spin on their off-road running track – they performed well, although the dry conditions meant I could not really put them to the (grip) test!

Trail version of the On Cloud Surfer

A long awaited promise, but still not available on a large scale, are the customised running shoes. Technica was boasting a fully customisable sole – though none of their staff could tell me any details about it.
Gore-tex (yes, the waterproofing brand!) has been working with Adidas and Salomon on ‘3D fit footwear’, which boasts a sock-like fit that is both breathable and waterproof. Salomon took this 3D fit footwear a step further and showed us a customised shoe range, where a customer can choose their outsole (deep or short lugs), midsole (choose your drop), and upper (three colours) separately.

Gore-Tex and Salomon collaboration on waterproof, breathable and customised footwear

In 2019 we will probably see a larger number number of brands competing on the trail running footwear market. We might have to wait a little longer for a ‘3D-scanned-foot-turned-into-customised-running-shoe’, but we will most likely already find ourselves with better fitting shoes and a choice of our midsole drop & outsole thread.