I reached the big 3-0 earlier this year. On 30th April to be precise. I’m a firm believer that age is simply a number and you can do anything at any age but this seemed too much of a good opportunity for a celebration and I didn’t want to miss it. But what to do. A Fancy meal? A house party? Hire a cottage somewhere? Whilst all of these sounded nice they didn’t sound memorable. I wanted something that I’d remember for years to come and that I would be able to link to my 30th. I also wanted to do something involving more time outdoors and less time nursing a sore head and dodgy stomach.

I love multi day trips (such as our 2017 run along Hadrian’s wall) and something longer seemed appropriate for a milestone birthday. I settled on a few days running up the stunning Northumberland Coastline. I went to University in Newcastle and spent time in Northumberland, mostly climbing but sometimes followed by a pint in a beachfront pub or a BBQ & wild camp on one of Northumberland’s many amazing beaches. I’d loved every bit of the coastline that I’d visited so the thought of joining them all together by running the whole coastline was really exciting.  Edinburgh is one my favourite UK cities (and has a train station) so ending the run there seemed ideal.

I planned a route starting just North of Newcastle and finishing in Edinburgh 4 days later. Unfortunately it was a bit further than I had hoped. Hugging the coastline made it a total of 140miles, approx 35miles per day for 4 days which sounded a bit too much like hard work for a fun birthday outing. I found a few shortcuts, rounded up the rest of the Bog Beauties (now with the new addition of Corin’s daughter, Audrey, aka Bog Baby) and we set off with the knowledge we could hop on a bus to cut down the daily mileage if we wanted to. 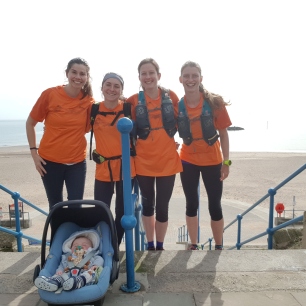 On day 1 Lisa, Bo and I set off running from Newbiggin-by-the-Sea. At 4 months old it was deemed that 35miles/day was too much for Audrey so Corin and Audrey went castle hunting and planned to meet us at the end of the day.

Day 1 took us along the beachfront, inland for a little bit then on the beach itself for a few miles. It was every bit as beautiful as I had imagined. We ran through Amble and swung inland, passing our first castle at Warkworth.  It was surprisingly hot for April and, back on the shoreline, we ran towards Alnmouth dreaming of an ice cream stop. We were on a bridleway and just had a small river to cross to get into the town and find an ice cream parlour. We looked at the map, then looked again. The bridleway went straight through a river estuary.  Well it didn’t quite go across the water but it went in one side and out the other. Weird. There would be no reason for the bridleways to lead in and out the river if there wasn’t actually a way of joining them, right? There must be a bridge that wasn’t marked, or a tug boat, or perhaps the river can be forded at low tide…. We jogged off to find out.

Unfortunately it wasn’t good news. The estuary was wide and deep. There was a channel in the middle that looked pretty fast moving… and there wasn’t a tug boat in sight. What was in sight was Alnmouth high street including a pub and a cafe, all only 30m away, but with a big river between us and them. With a sigh we turned round and ran the 5km diversion upstream to find a bridge. 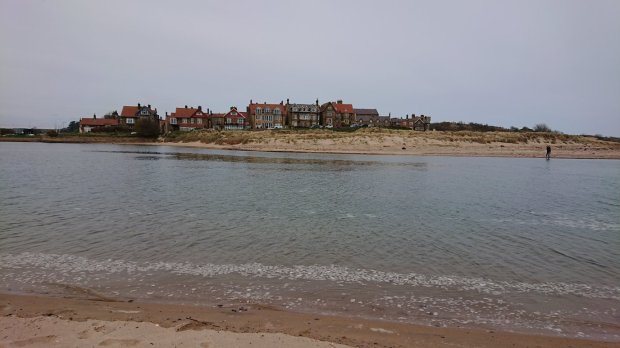 Alnmouth & ice cream – So close, yet so far!

We continued up the coast, passing golf course numbers 4 and 5 of the day. It was getting hotter and it was tempting to have a paddle but putting sandy feet back into sweaty shoes didn’t seem a recipe for 3 more successful days of running. We ran through Howick and on to Craster with its cute harbour. We passed the ruins of Dunstanburgh Castle and wished we had time to stop and look round but we were getting hungry for dinner so we pressed on, through golf course #6 and over the sand dunes to finish in Low Newton By The Sea with a pint of beer in The Ship Inn (my all time favourite pub).

We decided to cut off a bit of distance today so that we had time to explore (and to eat ice cream). Corin gave us a lift to Bamburgh and set off to explore Lindisfarne with Audrey before driving back to Sheffield. Passing Bamburgh castle we ran above the shoreline, through an obligatory golf course and on to Budle Bay. At this point we decided to take an inland route to cut off a bit of mileage and avoid a lot of running on roads.

We ran through the Belford (stopping for ice cream number 1 at the Co-op) and then into Kyloe Forest and it’s welcome shade. Unfortunately Bo had started to feel a niggle in her foot and was wary of making it worse so she left us at Fenwick and got a lift with some friends to Berwick.

Lisa and I crossed the A1 and headed back towards the coast which had lost it’s sand by now and was more pebbly. We met Jane Allen who is walking the coast of Britain. We walked with her a while and had a great chat; reminiscing about our trip last summer, talking van life and big adventures. Check out her website here, she’s pretty inspiring!

We ran towards Berwick along clifftops watching birds swooping into the surf below. We couldn’t resist pausing for ice cream number 2 (just to make up for the lack of ice cream on day 1) before dropping down into Berwick to meet my boyfriend Steve and 2 friends, Jack and Daisy, on the promenade who joined us for the last mile to the YHA. With 25 miles in our legs, sunkissed skin and full bellies thanks to a pint in a great micro pub  (The Curfew) and a pub dinner, we slept really well.

Again we decided to skip a bit of the route at the start to make the mileage more enjoyable. We hopped across the border into Scotland and set off from Coldingham. Bo’s foot was feeling a bit better and another friend, Jim, had travelled up from Newcastle to join us. The group of 7 of us ran downhill to St Abb’s village and immediately up again to the lighthouse. This set the scene for the rest of the day, the coastline here was far more jagged rising and falling sharply and often. Some of the group turned round after a few kms to head home and Jim, Bo, Lisa and I carried on. The cliff tops were lined with gorse bushes whose yellow blossoms popped out against the blue sea.

The footpaths weaved inland for a bit then back to the seafront. Sadly Bo’s foot had started to niggle again so she did the sensible thing and caught a bus the rest of the way. My feet had swollen the day before and caused a few blisters which were starting to cause problems again as the day heated up. Fortunately nature provided and I was able to use a gorse needle to drain them making them much more comfortable. We carried on Northwards towards Dunbar relishing every small bit of shade we could find along the way. Jim caught a train back to Newcastle and Lisa and I took the chance to buy another ice cream.

I was woken by “Happy Birthday” (at least I think that’s what it was) being blown loudly into my ears by 2 party blowers and a cup of tea thrust into my hand. This is how all birthdays should start. After a great breakfast we crammed our gear into our small bags and went to set off. There were only 2 problems, Bo’s foot wasn’t feeling much better and my feet had swollen further and I wasn’t sure they would actually fit inside my shoes. Birthdays shouldn’t be spent in pain and suffering so we decided to catch a bus to Prestonpans, making the day’s mileage significantly shorter.

We had a 2nd breakfast at Gregg’s (never in short supply in the North East) I had managed to persuade my feet into my shoes but was very glad we didn’t have far to go. Bo’s foot was hurting to walk now so she took a bus to Edinburgh whilst Lisa and I sat off to hobble-run through parks, along seafront paths and, of course, past another golf course to Edinburgh.

We met Bo at the foot of Arthur’s Seat. Arthur’s Seat is one of the reasons I love Edinburgh (how many cities have such an impressive hill within a mile of the town centre?!) and it seemed a great place to end our run. We climbed up to the top and found a patch of grass looking over the city in one direction and the sea in another. Bo had bought prosecco and a cake and we stuffed our faces before wobbling down to an all-you can-eat sushi restaurant and some live folk music. I honestly can’t think of any better way to spend a birthday!!

Fun on the beach 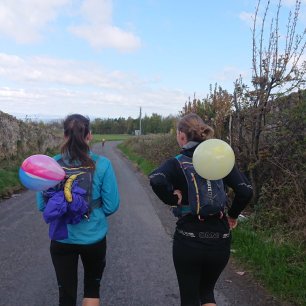 One thought on “A great 30th birthday party”