At 2,864m Triglav is Slovenia’s highest mountain, the crown jewel in the Julian Alps. It is also the centrepiece of the Triglav National Park, a 838 square kilometre area jam packed full of Karst mountains, emerald green lakes, beech forests, waterfalls and hidden old settlements. It is breathtakingly beautiful.

We had been considering Slovenia for our recent honeymoon, it wasn’t somewhere I knew much about but a bit of research revealed it had a lot going for it – great food, local wine, an abundance of outdoorsy things to do (kayaking, mtb, running, paragliding, hiking) and prices were significantly cheaper than its Italian and Austrian neighbours. And then i stumbled across some pictures of the Triglav National Park – row upon row of sharp edges mountains, bright green valleys, picturesque mountain huts – I was sold!

I was really keen to do a multi day walk or run in the Triglav National Park. I had never stayed the night in a mountain hut and that needed to change! The only problem was i struggled to find much information online about accessing the park, what the trails were like and what kit we needed for the huts. Hopefully the below will be useful for anyone wanting to explore the Triglav National Park in future.

Our main aim was Triglav with walking in other bits of the Park being an added bonus. Triglav can be climbed from a number of starting points (with the most popular being from Lake Bohinj in the South, the Vrata Valley in the North and from Rudno Polje in the East)

We decided to climb Triglav from the South, which is the longest but apparently the most scenic approach.  This was, after all, our honeymoon so we decided to reduce some of the ascent and start from Blato Meadow which is less meadow and more car park. Access to Blato Meadow is up a winding road which is narrow but with plenty of passing places. The road is tarmac’d all the way up. It cost €10/24hour period to leave a car there (technically parking is free but there is a barrier blocking the road on entry and exit and you are paying for use of the road which goes towards it’s upkeep). Collect a ticket at the barrier on the way up and pay (caheadsh only) at the barrier on the way down. Alternatively you can walk up from the West end of Lake Bohinj which adds on approx 600m more ascent.

From Blato Meadow we headed for Krstenica, a collection of wooden buildings that were apparently originally built to mine the local area. It was a constant uphill slog but we were rewarded by an amazing view as we broke above the treeline.A word of warning here, I believe the paths from Blato meadow are usually well marked and clear but at the moment there is a lot of logging going on to remove beetle infested. The logging trucks have created many new tracks and churned up the ground.  Extra focus on Navigation required whilst the loggers are still operating!

From Krstenica we walked to the Vodnikov dom na velem polju hut via the Jezerski coll. It was super hot so we thought it would be rude not to have a cold Radler at the hut. Sadly they were out of cake. From there it was a quick walk along a river valley and over a small coll to the Dolic hut where we spent the night. We were pleased we booked beds as the hut already had a waiting list, those unlucky enough not to get a bed were going to be “sleeping” on the wooden dining tables. The Dolic hut was cute, we ate a hearty meal of veg stew/meat Goulash and pancakes with jam, watched the sun set over the mountains and went to bed (hoping neither of us needed to get up int he night to use the drop toilets located outside in a shed). 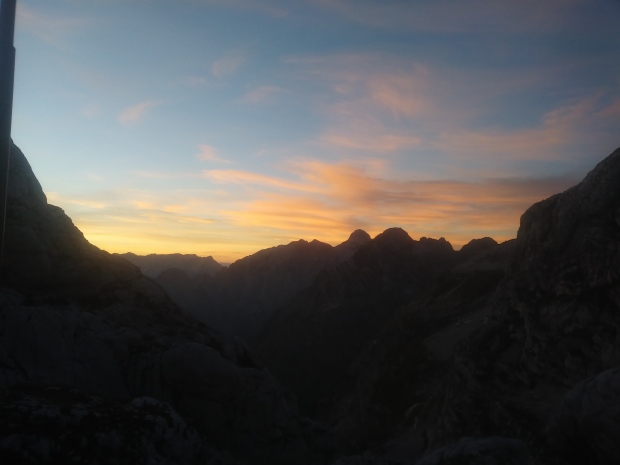 Watching the sun set over the mountains 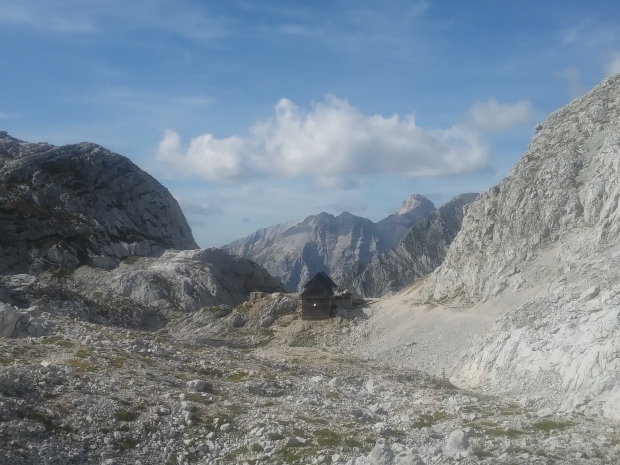 Dolic Hut – Our home for the night

Breakfast was served from 6am and having forgotten earplugs we were awake early so thought we may as well get going. Fuelled by 3 fried eggs, bread and a cup of floral tasting fruit tea we left the hut to tackle the last 700m of ascent up to Triglav’s summit.

We’d read that Via Ferrata kit was required for Triglav. We had taken ours so thought we may as well use it but there were plenty others without VF kit. If you are comfortable with exposure  it probably isn’t necessary but i would recommend a helmet, there was plenty of large loose scree and a lot of people. A real lot of people. Whilst the clamber to the summit was enjoyable and the views were incredible I think Triglav suffers from the same curse as Ben Nevis. By virtue of being the tallest mountain it has become the most popular but Triglav itself was probably my least favourite bit of our 48hours walking. After the obligatory summit photo we walked along the ridge (caught up in a snake of people which had to stop frequently to pass people coming up) to descend to the Planika hut. It might be more enjoyable on a quieter day but if i did this trip again in good weather i think i would miss out Triglav! Most of this section was on paths over solid rock with some steep sections where you needed to use your hands too.

From the Planika hut we walked up and back to the Dolic Coll, waved to the hut where we’d spent the night and continued over Kanjavec to the Valley of the 7 lakes (Triglavskih Jezer). The water in Slovenia is amazing – so clear that you can see the bottom of every lake yet tinged an Emarald green colour. They were so inviting! Unfortunately swimming is banned in these lakes.

The path was very clear and marked with names and dashes painted on the rocks. We quickly reached the 7 lakes hut (Koca Pri Triglavskih Jezer) beautifully situated between 2 lakes and devoured a big plate of macaroni. A large group of people appeared at the hut and more and more kept arriving to join them. At 4pm one of them produced a piano accordion from their hiking bag and started up some tunes which the rest of the group readily (and loudly) sung along to. It took a more bizarre twist when the full group donned surgical scrubs and went on a walking singing tour round the lake. The hut guardian explained it was the annual party for the local Mountain Rescue team. Fuelled by a lot of cans of beer and even more glasses of various schnapps they kept us and everyone else staying at the hut entertained for the full evening.

Our plan for the next day was to walk back to the car at Blato Meadow and head down to Lake Bohinj for a refreshing swim. The days had been warm so we had decided to leave early anyway but we then realised that if we pushed it a bit we could be back at the car and out the gated road before 48hours were up, saving €10 on parking which we vowed to spend on ice cream instead. €5 of ice cream is enough incentive to make me do a lot of things, including it seems getting up at 6am and power marching back to the car without breakfast. Our plan came together perfectly, we made it back in plenty of time, had a brilliant breakfast at a local cafe and had enough energy left over to run a lap of Lake Bohinj before it got too hot and we jumped in for a swim. Triglav National Park was a treat!

Mountain Huts – Basic places to stay in the mountains. To me they seemed somewhere between a youth hostel and a Scottish bothy. Accommodation is in bunk beds (sometimes in alpine bunks) with pillows and blankets provided. You can either carry your own sheets or hire these for around €2/night. Accomm in a large dorm was €25 increasing incrementally to €30 for beds in smaller rooms. A half board price is sometimes available and works out a bit cheaper. Discounts for students & members of affiliated climbing clubs.

It is almost expected that you will buy dinner and breakfast at the hut (neither will be haute cuisine but will be wholesome hearty food that will set you up for day of walking in the mountains). Dinner was around €10 and breakfast around €6. A beer was around €4 and a large bottle of water was about the same. Most huts have a clean water supply but at a few of the higher huts there isn’t a source of drinking water so you will need to buy bottles from the hut. Worth bearing in mind that everything you consume at the hut has to be brought in by helicopter or quad bike.

Up to date price lists, open dates, locations of all huts and contact numbers can be found on this website https://en.pzs.si/koce.php

It is worth booking a bed in the summer season. Book by calling the hut, all staff we spoke to spoke good English (and Italian, German & Slovenian!), no bookings by email.

Maps – Whilst paths are generally marked with painted dashes/circles i would still recommend taking a map and compass. Many maps of the area are available but we used the green 1:25 000 map produced by the Alpine Association of Slovenia which served us well (but isn’t very durable – map case essential for a longer trip).